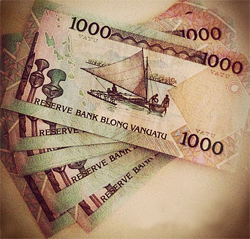 Vanuatu currency is both simple and tricky. The basic currency is known as a Vatu shortened in writing to “vt” or “vuv”. There are notes and coins The notes are in denominations of 200vt to 10,000vt and the coins from 1vt to 100vt.

There are many places in which to exchange your money in Vanuatu but not every outlet deals with Aussie dollars. Goodies in Port Vila will give a good if not the best exchange rate. You also have the option of exchanging currency at the airport or at most resorts and even the banks in town. Travellers’ cheques are easy to cash.

You can use your plastic ATMcard to withdraw Vatu, but the limit will be set by your bank in Oz. Credit cards are accepted in most but not all shops. You have to pay for buses and taxis using the local currency. Obviously the exchange rate varies but recently one Australian dollar is equal to about 88 Vatu. For AUD$100 you can expect to receive about 8,800 Vatu.