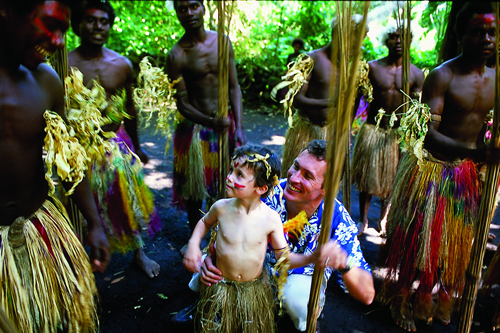 There is an abundance of culture in Vanuatu, a land rich in many cultures and languages for hundreds of years. A “kastom” or custom in Vanuatu can involve the way of life of the people in a specific area, their status systems, authority, ceremonies, dances and ways of farming. But these kastoms can vary from island to island and even from district to district on the same island.

Village life dominates the population where most people live in groups of often no more than 50 people. But despite these small groupings, the people do sometimes come together for spectacular events. The Nekowiar is a three day festival on the island of Tanna where extravagant gifts are given and up to 2,000 people dress in over-the-top make-up and costumes.

It’s fair to say that the locals on Vanuatu developed bungy jumping way before other countries. There are certain rules of etiquette on Vanuatu. What you wear, drink and where you travel are important to locals. Prepare before you go and if in any doubt, ask.

Vanuatu has an amazing culture that must be experienced at some point in your life. The fact that it’s so geographically close to Australia makes the diversity even more incredible – much of Vanuatu still operates in its traditional format – A “must see” for any traveler!